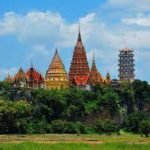 South-East Asia is notorious for its brutal approach to policing drug use and production. But in Thailand change is afoot, as authorities seek to develop a homegrown medical marijuana industry.

Its conservative, military-dominated Government has spearheaded the effort, which seeks to make Thailand a regional centre for the production and distribution of medical marijuana.

Who can get medicinal marijuana?

The Federal Government has approved the sale of medicinal marijuana, but it still won’t be easy for people to get a prescription.

It has approved use of cannabis extracts for treatment of a range of illnesses and conditions, including cancer, epilepsy, Alzheimer’s, Parkinson’s disease and anxiety.

The Government has promised to open more clinics in greater Bangkok, with patients able to book appointments via a specialised smartphone app.

Front and centre of the Thai Government’s campaign to promote medicinal marijuana is its mascot Dr Ganja, an approachable, leaf-headed scientist.

So where did this push towards developing Thailand’s legal cannabis industry come from, and could it signal further liberalisation of drug use in South-East Asia?

When did the push towards medical marijuana start?

First outlawed in 1935, marijuana has reportedly been a part of traditional Thai medicine and cooking for centuries, mainly used as a versatile form of pain relief.

Thailand legalised medical marijuana in December 2018, making it the first country in South-East Asia to do so.

The military-dominated parliament voted to amend the 1979 Narcotic Act to approve the use of marijuana for medical use and research, calling it a “New Year’s gift” to the Thai people.

A dedicated Health Ministry website now provides information to the Thai public about cannabis cultivation, medical research and the legal status of marijuana in the country.

PHOTO: Authorities have showcased a range of cannabis oil products made in Thailand. (Reuters: Jorge Silva)

While thousands of drug convicts sit on death row in prisons across South-East Asia, the local trade in methamphetamine and other illicit drugs is flourishing.

It is reportedly home to Asia’s first “ganja studies” program, which the university says has attracted significant interest.

Possession and trafficking of the drug still attract harsh penalties.

But further slated legal changes could allow people to bring medical cannabis into Thailand and foreigners to hold stakes in commercial cannabis producers of up to 33 per cent.

US firm Rafarma Pharmaceuticals recently employed a Thai corporate officer in order to run its “upcoming” Thai operations and create “the most synergy between the company’s European and Thai cannabis cultivation operations”, it said in a statement.

Why did Thailand decide to promote medical marijuana?

Put simply, the military establishment recognises there are huge business and tax revenue-raising opportunities to be had.

According to a 2019 study by Grand View Research, a US-based market research firm, the global legal marijuana market is expected to be worth US$66.3 billion ($96 billion) by the end of 2025.

“The cannabis market, and all illegal drugs, are controlled by the black market — organised crime,” Gino Vumbaca, president of Harm Reduction Australia, said.

Where To Buy CBD Oil In Florida – CBD Oil in Florida

Two reasons why the UK should legalise cannabis

Top 5 ways CBD can make your life a breeze!!

6 Novel Ways to Help the Environment