The new strain, the only one in the cannabis market, is totally legal as it is free of psychoactive components and stands out for its big therapeutic potential in the treatment of illness as Crohn’s disease, colon cancer, glaucoma, Parkinson’s and Alzheimer’s, among others.

The Spanish Company, Hemp Trading, specialists in the international distribution of products for cannabis growth, has developed, together with the Spanish University Universitat Politècnica de Valencia (UPV), the first legal cannabis strain with high medicinal potential, free of psychoactive components. It’s a very attractive strain specially for medicinal cannabis patients for its therapeutic properties to treat illness such as Crohn’s, colon cancer, glaucoma, Parkinson’s and Alzheimer’s, among others. 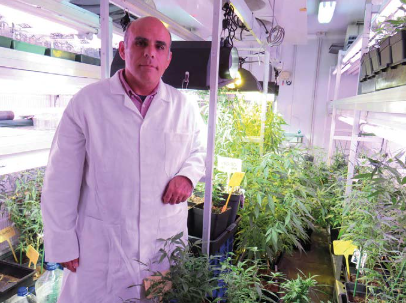 The achievement has been to develop a strain that blocks some steps of biosynthetic route of cannabinoids, avoiding the formation of Tetrahydrocannabinol (THC), the illegal and psychoactive component, increasing the stack of cannabigerol (CBG), cannabinoid with high medicinal potential and since now it was a residual amount, Hemp Trading’s CEO, Ernesto Llosá said.

CBG is the first cannabinoid which is formed in the cannabis plant. Therefore, it’s considered like “the mother’s cell of cannabis because it is essential to create THC and cannabidiol (CBD), which both are two of cannabinoids with a greater presence. As the plant grows in the biosynthetic process, CBG is transformed into THC, CBD and other minority cannabinoids. As a result, CBG disappears basically, Salvador Soler, researcher of the Spanish University, Universitat Politècnica de València (UPV) informed.

Thanks to the research work of UPV, one of the only five entities in Spain that have a license for the cultivation of cannabis for scientific purposes, not only THC has been eliminated, but the concentration of CBG has been increased. Nowadays, industrial hemp, as the majority of European cannabis strains, usually accumulates a percentage of THC over the legal allowed (0,2%).“Thanks to this development we get the plant completely legal and with CBG levels over 15%, when the normal quantity is 0,1-0,5%, Hemp Trading’s CEO, Ernesto Llosá explained. “Until now the CBG present in the cannabis varieties was in a minor quantity because it was mainly transformed into other cannabinoids”, the Spanish businessman added.

CBG is the great unknown in the cannabis plant precisely because it is found in small quantities and there is hardly room for further research for medicinal use, as has been done with THC or CBD. “But thanks to this development, CBG can be obtained massively, opening the door to large-scale production in a legal manner, as well as doing more research to evaluate its medicinal properties”, Llosá said.

In addition, the CBG extraction process requires less purification than CBD, the other non-psychoactive medicinal component of cannabis that is now booming. As Llosá explained, “plants with CBD contain a fraction of THC that has to be separated and rejected in the purification process.

In our case, the CBG comes out pure without the presence of other cannabinoids, that is, we make sure that it is free of THC. Therefore, it guarantees the absence of a psychoactive component “.At the moment, the company is registering the new strain and has not yet defined its marketing process, but this plant is an incentive for the cannabis sector and is a great attraction for pharmacists interested in making use of the medicinal properties of cannabis legally, as well as for industrial use.

Generally, the medicinal properties of CBG are similar to those of CBD. Several scientific studies such as that published by the British Journal of Pharmacology (Taming THC: potential cannabis synergy and phytocannabinoid-terpenoid entourage effects) indicate that CBG reduces pain, reduces the inflammation that produces some diseases such as Crohn’s disease, is a great inducer of sleep and has antidepressant properties. On the other hand, CBG inhibits the growth of cancer cells, helping to slow the progression of colon cancer.In addition, CBG could be a powerful partner for the treatment of glaucoma, since it reduces intraocular pressure.

COLLABORATION WITH A SPANISH UNIVERSITY

It is not the first time that the company Hemp Trading collaborates with the Spanish University UPV in cannabis scientific research projects. In fact, the previous project used hybridization techniques to obtain plants that maximize CBD production without exceeding 0.2% THC, the legal limit to be grown in Spain.

To do this, through the use of varietal crosses, the ability to produce CBD, more typical of hemp plant, is transferred to plants with a high cannabinoid content, without altering their high resin production, which is where cannabinoids accumulate