Water is essential to life; without water, nothing thrives, but like everything else, too much of a good thing can be harmful. Today we’re going to explain how overwatering affects cannabis plants during their life and different stages.

Cannabis seeds need moisture, heat, and oxygen to germinate. If these three elements fall apart, seed germination can be jeopardised and might not be completed.

The quintessential method when germinating cannabis consists in placing the seeds between two paper towels or two plates, preventing the moisture from escaping too quickly, and allowing the seed to enjoy a stable environmental humidity. 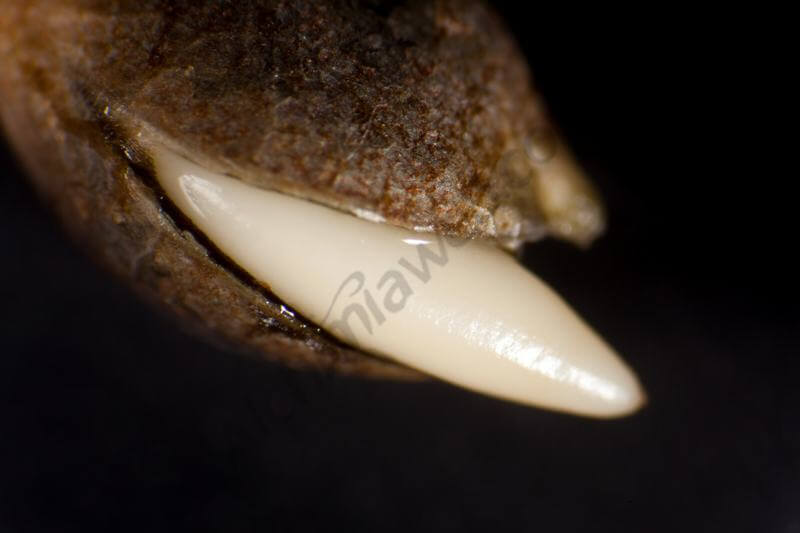 When you exceed the water dose at the time of germination, it’s very likely that your seeds will rot quickly. If, in addition, it’s a warm time of the year, this fungal infection can be even faster.

Stagnant water is synonymous with fungi, so you need to make sure that any excess water is thoroughly drained before placing your seeds between the paper towels. It is also highly recommended to change the paper towels every 2 days when the seeds take a little longer to sprout, as fungi can emerge more easily and infect both the seeds and the germination medium.

If your seeds don’t germinate all at the same time, but little by little, remove those that have already germinated to prevent them from rotting. You will know they’re rotting because the tip of the root will take on a black, brown or dark yellow hue. 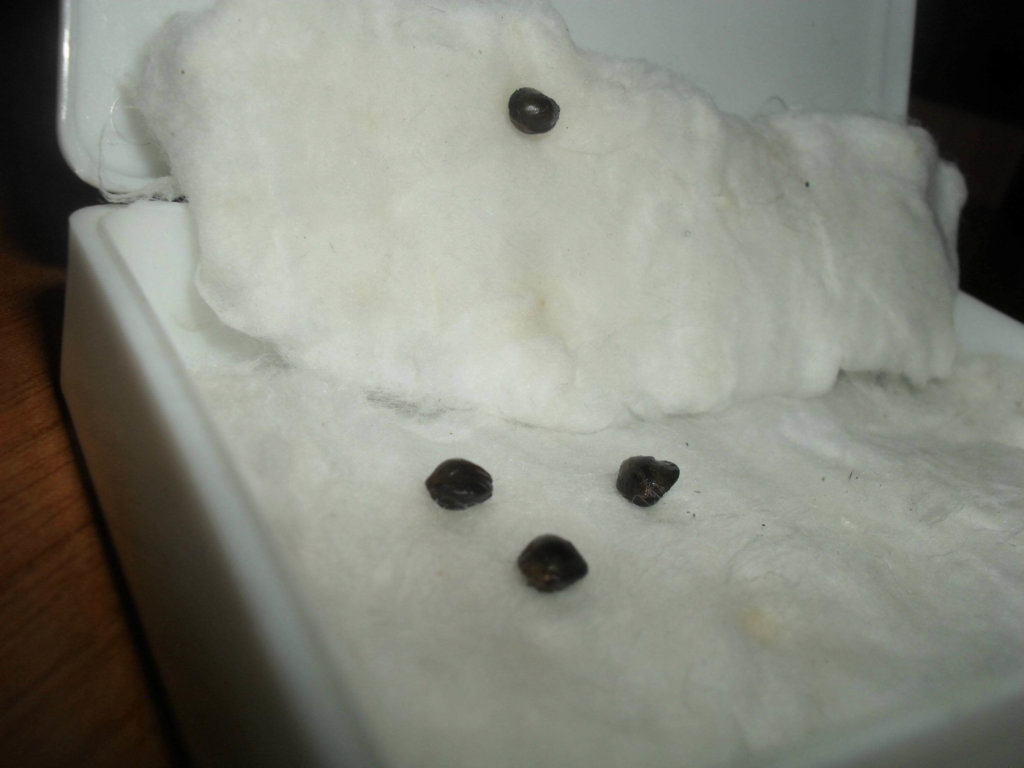 Rotten seeds due to an excess of water

At the beginning, it’s also possible to use low doses of hydrogen peroxide to prevent the development of fungi, but it’s always best to avoid this and use instead beneficial fungi such as Trichoderma, which, on top of preventing the risk of fungi like Fusarium, it also contributes to rapid root growth.

There are other germination methods apart from the paper towel technique, such as directly germinating in peat moss pellets. In this case, you’ll need to take into account several factors to avoid any errors, as it’s not as simple as just placing the seed in the jiffy.

First, you’ll have to let the jiffy’s fill up with clean water to prevent contaminants such as fungi or viruses from, for example, wells, streams, and other places.

Once the jiffy pellets are soaked and have expanded to their maximum size after being completely hydrated, you’ll need to squeeze them a bit with your hands to get rid of the excess of water that might be trapped inside them. 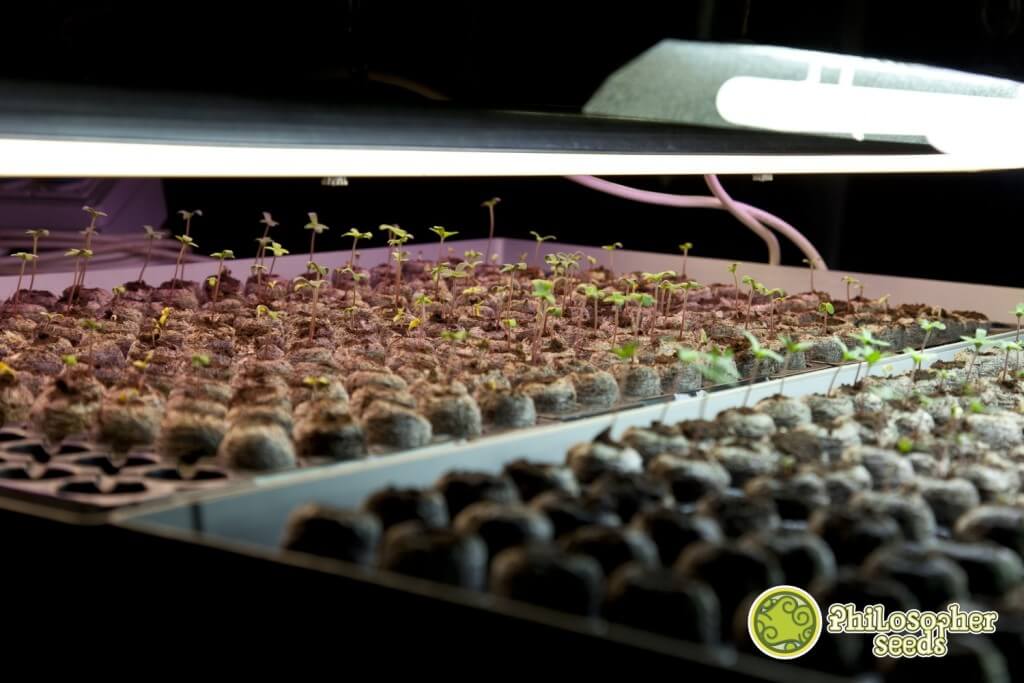 If the pellet stays compact after the squeeze, you’ll have to decompress it, keeping the moisture inside the jiffy but without it being too compacted. This way, when the roots emerge, they can easily grow through the pellets, and the plants can begin to grow above the surface.

Remember not to push the seed too deep inside the jiffy, and simply place it on the top and cover it with a little loose soil from the same pellet. This way, the plants will pop their heads in about 4-6 days, at which time they should be transplanted.

Once the germination phase is over, the plants will enter the seedling (small plant) stage.

At this point, you must be very careful, as it’s one of the most challenging moments in the plants’ life, since they’re very small and frail. Any serious error could lead to premature death.

The irrigation of this plant with a tiny and thin stem and just one pair of cotyledons must be fully controlled in order to provide it with some moisture, but not too much. How can you do this? The easiest way is using a very small pot ( from 0.25 litres to 0,5l) as in case of overwatering, this pot will dry quicker than a container with a bigger capacity. 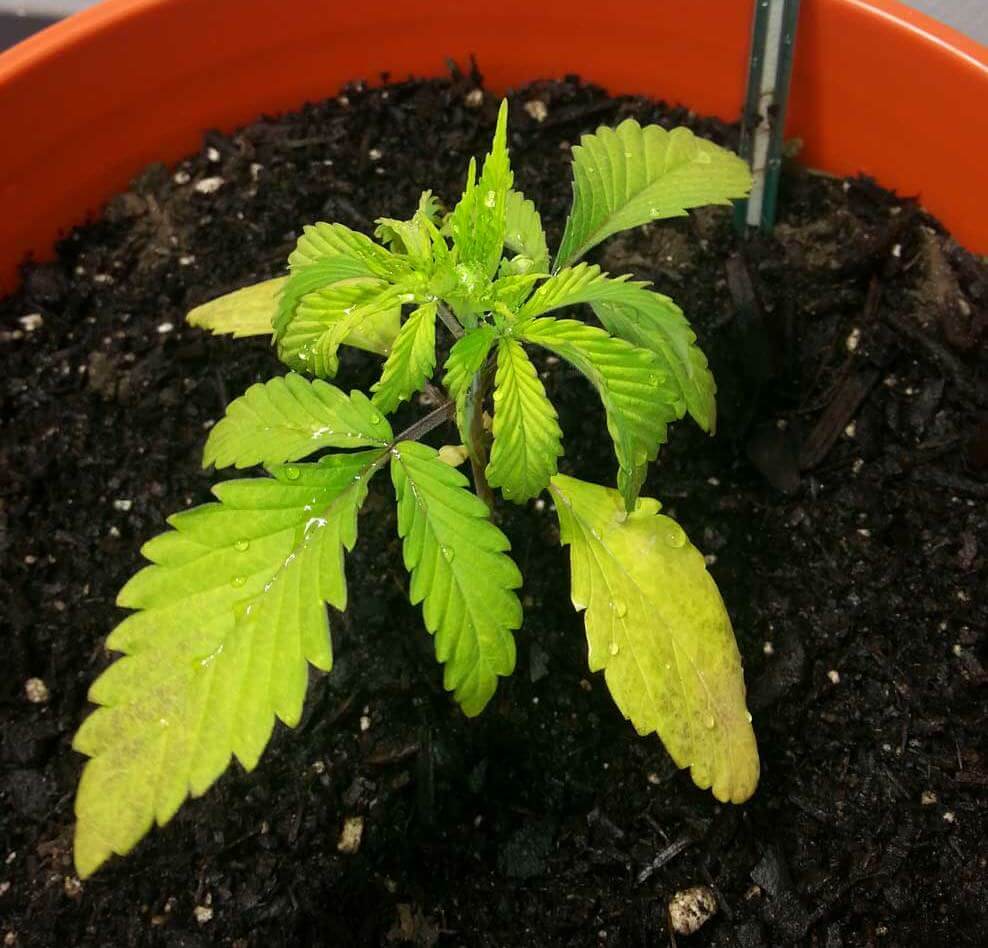 If you overwater a plant in a large pot, the plant won’t develop roots to find moisture, as it will have a constant supply available.

Without this need, the plant gets used to this means of life and doesn’t create many roots, negatively affecting the growth of its aerial part, which will stop growing or will grow very little.

If this period of moisture and high humidity lasts for a long time, the substrate’s lack of oxygenation will become a problem.

Since there’s no oxygen in the roots, they will gradually rot and go from an immaculate white shade to a dark brown colour, and the whole root system will rot. When the roots begin to rot you’ll notice the plant will take on a lighter green colour, as if would suffer from nitrogen deficiency, but the real issue is that the plant can’t absorb any nutrient.

If the overwatering problem is not fixed, the seedlings could be attacked by fungi such as Pithyum or Fusarium, both of which are deadly to plants. It should be said that these fungi are very difficult to fight once they have settled into the substrate.

Another aspect to highlight is that each plant, even those with the same genetics, might have a greater or lesser resistance to root rot. And the same is true for the different marijuana strains, as all of them have varying degrees of resistance, hence the possibility of choosing humidity-resistant cannabis plants by growers who still don’t control all aspects of the cultivation. 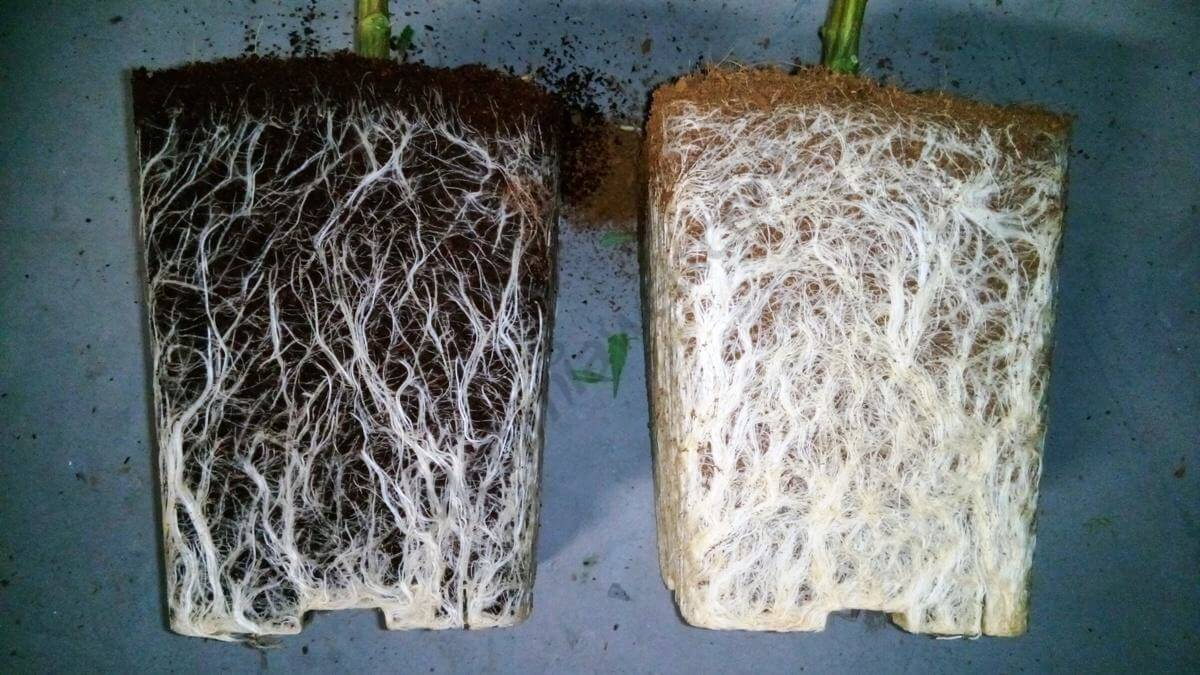 Roots with and without Trichoderma

The use of Trichoderma and endo mycorrhizae greatly helps to preserve the roots’ optimal state; they don’t perform miracles, but they act as a protective shield colonizing the roots and thus preventing the development of dangerous fungi.

We are entering the adult phase. The plant has already developed a strong root system and now can handle better any water excess. Still, if the substrate gets overwatered during a prolonged period, the lack of oxygenation can cause root rot at any time.

The consequences are the same as for the small plant, but now you’ll have more time to react; nevertheless, getting rid of the fungus is equally difficult once it has colonized the root. The result, when left unattended, is the death of the plant, which dries from top to bottom. 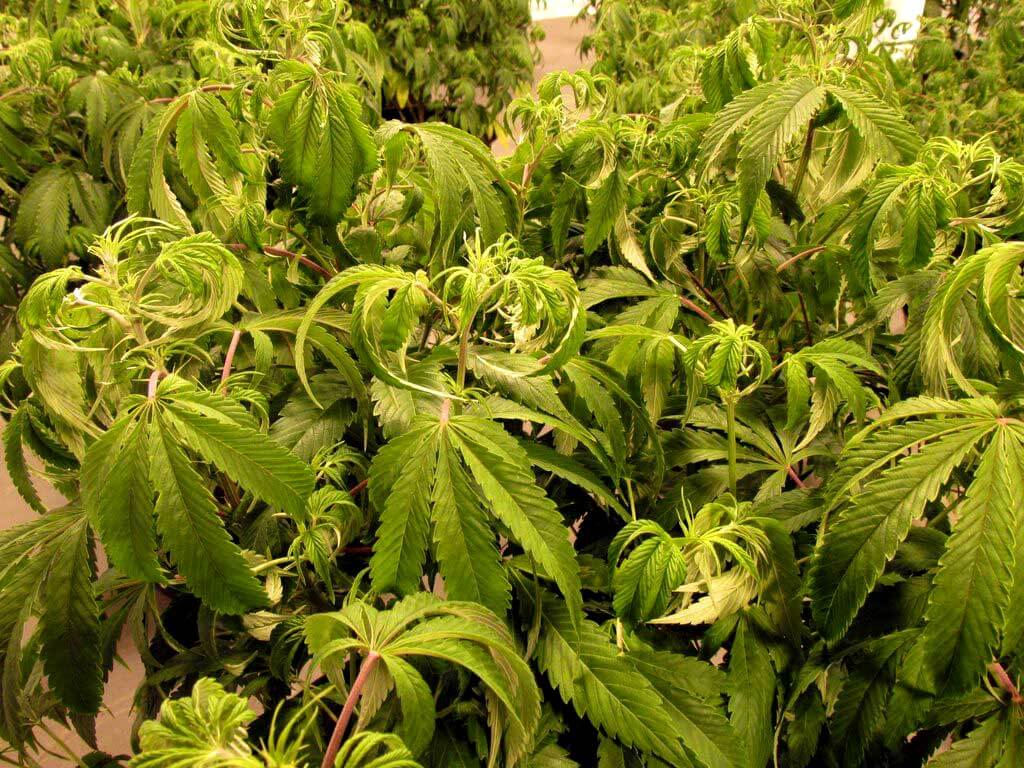 When identifying an early onset of root rot, you can let the pot get dry, and next time you water the plant, use the right amount of water with some hydrogen peroxide, around 3-5%; so if a fungus is present, it will die from oxidation.

To stay away from these issues, you should avoid using large amounts of water that won’t allow the substrate to dry in less than 2-3 days. In other words, you need to water your plant twice or, even better, three times a week. It requires more work, but this way it’s also easier to control the irrigation.

During the flowering period the plants need more nutrients and water, so in this stage root rot doesn’t affect that much to plants grown in pots or directly in the ground.

At this point, and unless there’s a prolonged period of rain, it’s very rare that the plant will suffer from overwatering, as both its needs and absorption capacity are naturally high.

In the event of overfeeding cannabis plants, their roots could be suffering from an excess of salts, but if you fix this problem quickly with some flushing, you won’t have to worry about it. 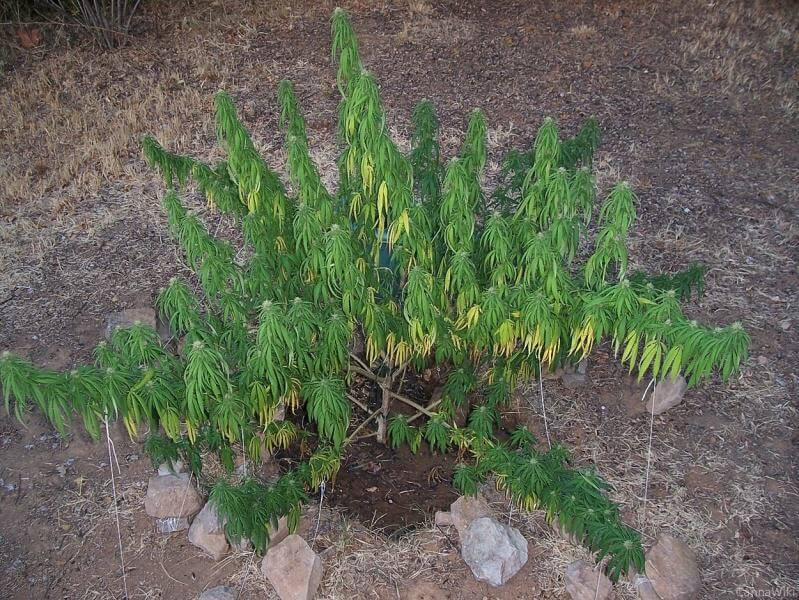 During the bloom period, some leaves might fall off the plant, and you’ll need to prevent them from remaining inside the pot, as if they mix with soil and moisture, they could rot and give way to harmful fungi, which can contaminate the roots and attack the plant’s metabolism. This is why it’s always advisable to keep the substrate clean from organic matter.

If your plants experience overwatering and root rot as a consequence, the initial symptoms will be yellowing of the foliage and withering with droopy leaves. If left unattended, the plant can dry completely.

There are several products that can help you to control the irrigation and to know when to water your plants. These include substrate moisture meters for potted plants, such as Tenax humidity tester or Flower Care Smart Monitor by Xiaomi.

These type of products need to be inserted in the substrate almost to the bottom of the pot, to learn the actual state of moisture. In a couple of minutes, it provides clear and easily visible results, and you’ll know whether you should water or not.

Do not hesitate to share your doubts and tips on overwatering plants, we’ll be pleased to read them.

5 Factors That Affect Your Cannabis High

How to optimise your cannabis grow with CO²

How to flush cannabis plants

How to make Seed Sprout Tea (SST) for cannabis plants