What is Kief or Skuff?

Kief is a substance derived from cannabis and consisting – for the most part, as you’re about to see – of glandular trichomes. It’s, therefore, a resin extraction of considerably higher strength (cannabinoid concentration) than the buds used in its preparation. Given its old age and popularity in many disparate areas, it has multiple names like kifi, kif, skuff, dry sift, and of course, kief.

As it often happens with extracts obtained without solvents, you can find different qualities, which depend on a number of factors as varied as the cannabis strains used and the pore size of the sieves with which the plant matter is sifted. Let’s see exactly what is kief and how to obtain it. 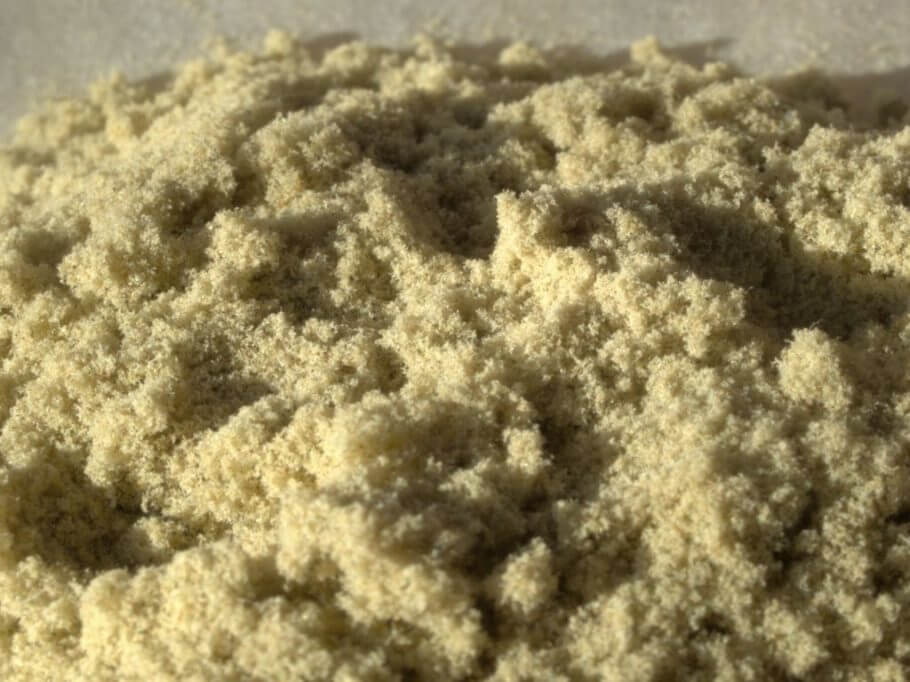 Depending on the sources consulted, the term “skuff” would designate a bad quality kief or cannabis resin. However, we will stick to a more general use and consider them synonyms. Kief or skuff is obtained from the flowers and leaves of female cannabis plants that are rich in trichomes, what is commonly known as resin, and where cannabinoids and terpenes, as well as all the other compounds secreted by the plant, are produced and stored.

After sifting the plant matter in different ways (that we will see later), you get kief, a yellow/greenish powder containing a large amount of trichomes. You can leave this powder as it is or lightly press it with your hand to stop it from crumbling (which would receive the name of kief or skuff), or you can compress it with the help of heat and an industrial press, what is commonly known as hashish and has a more compact and harder texture, as well as a much darker colour due to the heat and the high pressure. 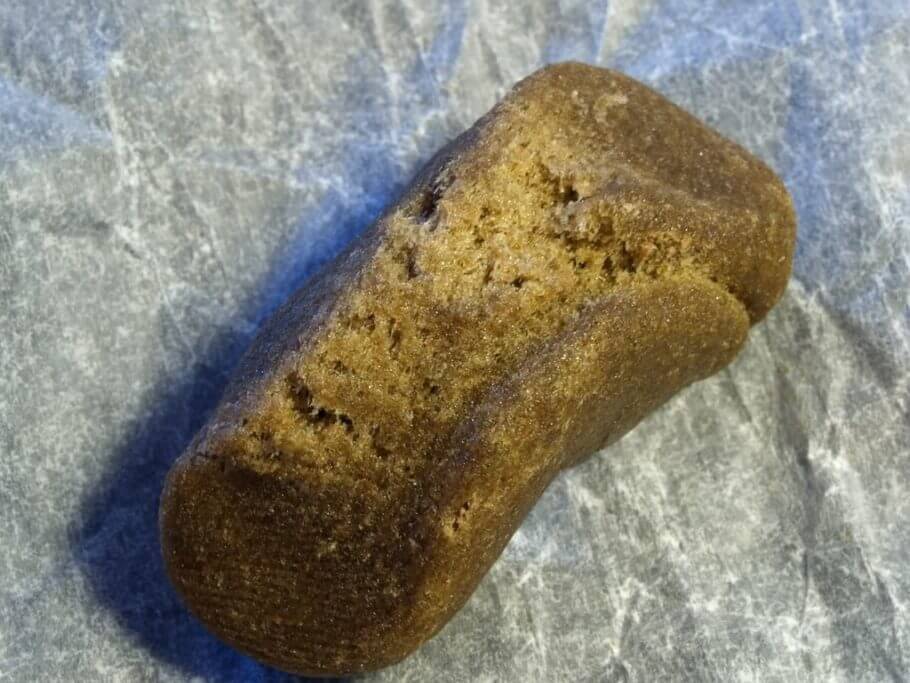 Hashish or kief? This resin has been slightly pressed by hand

As you can see, the main difference between kief and hash is the degree of pressing, as both products are made of exactly the same compounds (trichomes and some or other contaminants such small dust or plant matter particles), and are obtained in the same way, sifting the plants with sieves to separate the resin from the plant debris. Both types of concentrates can have more or fewer contaminants, and therefore offer a greater or lesser quality. Don’t be surprised if you hear someone referring to crumbling resin as “hash” and to what you would normally call hash as “kief”.

It’s possible that many of you have already associated the word “kief” from the title with Morocco when you started reading this article. Indeed, Morocco is one of the world’s major producers of kief, where it’s considered to be a traditional product (though as you saw in our article on Moroccan hashish, its hash culture is relatively young compared to other countries).

Origins and evolution of Moroccan hashish

It’s often consumed using long pipes called sebsi, and frequently it’s mixed with a local plant used as a substitute of tobacco. Sometimes, of course, it is also smoked with tobacco or cannabis buds or leaves. It’s widely used throughout the country, although it’s more popular the closer you get to its cultivation and production areas in the Rif region.

In fact, as many travellers know, in Morocco is much easier to get hold of a good kief or hash than purchase quality buds, which tend to be used almost exclusively for the production of this resin, which is easier to export as it takes less space and gives off a much fainted smell. It is also more cost-effective, as the raw material (buds and leaves) is processed in order to obtain a more powerful resin concentrate. The more powerful, the more expensive it will be. 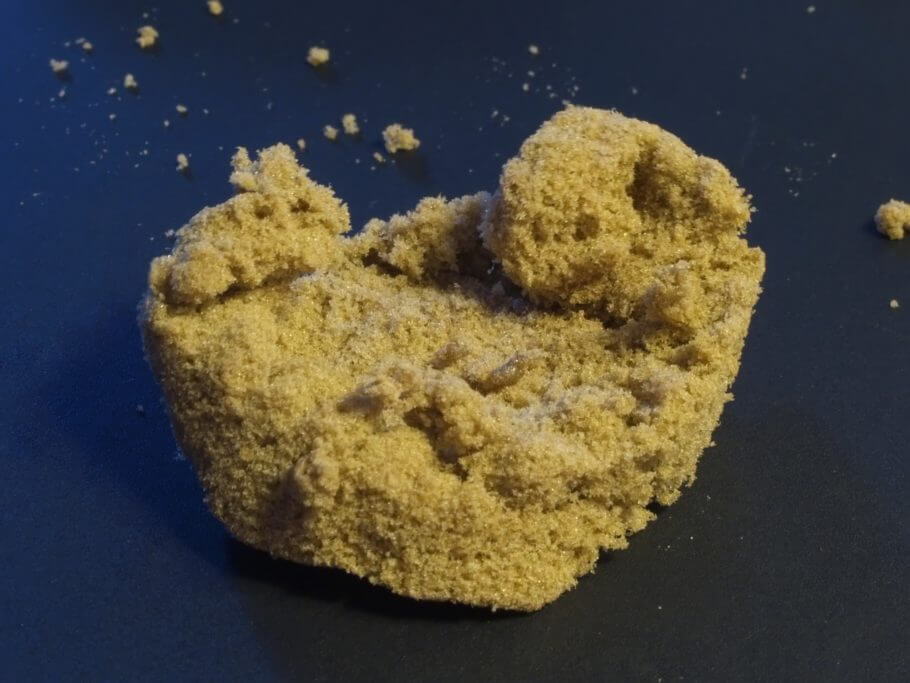 Good quality kief sticks to your hand to the lightest touch

How to make kief or skuff

The process to obtain kief hasn’t changed in several centuries. The plants are dried and sifted with sieves made with different materials, from silk to nylon (and even stainless steel). Depending on the sieves’ micronage, and whether you use one or several of various sizes, you will get a different level of quality. The sieve is tied to a container used for collecting the resin, and the plants are placed on top to start the sifting.0

After a few minutes (in Morocco they cover the plants with a plastic wrap and whip them), the plant matter is removed, and later sifted again to obtain a product of second quality, somewhat lower than the first. The sieves are then removed, and you can collect all the resin glands that are left in the last container. Now you have a good handful of kief!

You can wrap this kief (its own nature will make it become compacted without darkening its colour) and store it as such, after curing if you wish, or you can compress it with heat and a press to get what is usually known as hash. So, kief and hashish are made of exactly the same: cannabis trichomes that have been separated from the plant using sieves, and some or other contaminant, as you will see below.

If you are curious about the details of this process, do not hesitate to consult our article How to make dry sift; we are confident that it will clarify any doubts.

When working the kief with your hands it gains consistency

On the quality of kief

As you have seen, the kief elaboration process is relatively simple. If you do it right, you’ll get a product of great purity, although unfortunately, and due to commercial interests, this is rare, unless you resort to real artisans or do it yourself.

Much of the kief available has contaminants, usually small particles of plant material that have been grounded during the sifting process and gone through the sieve together with the resin. This explains the kief colour, which sometimes can be more greenish; the higher the presence of plant matter, the greener it will be. And the opposite, the more golden and clear, the fewer contaminants. The producer needs to be very careful during the sifting process, and work with very low temperatures to obtain a high-quality kief, or more and more plant matter will end up contaminating the resin.

In addition to plant matter, kief can also be contaminated with dust (if the plants or the work environment are dirty), pollen from male or hermaphrodite plants, and small insects or their faeces when the processed plants have a pest problem. If the storage conditions are not adequate, it can even develop fungi, although this only happens in very extreme cases.

Another typical test is to apply a flame to the kief to check its reaction to the heat and, this way, determine its approximate degree of purity. If the kief boils, it contains a large amount of cannabinoids and terpenes. If, on the other hand, it hardly bubbles – or doesn’t boil -, this means that it has a lot of contaminants (none of the pollutants mentioned can boil), or that it has lost a large amount of cannabinoids and terpenes due to several factors. 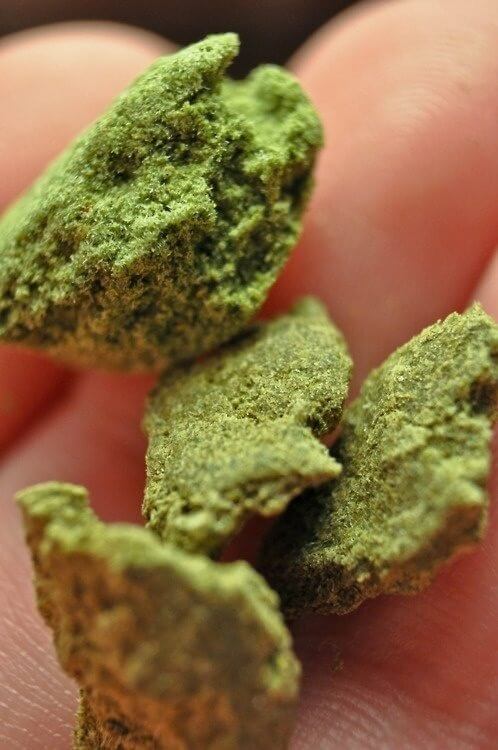 As you continue working the plant matter, it loses quality

Kief can be consumed in a variety of ways. We have already seen that in Morocco, one of the world’s largest producers of kief, they tend to smoke it with long and thin pipes, often mixed with tobacco or other plants. You can also mix it with tobacco or cannabis and roll it up in a cigarette, an option which is very popular in southern Europe. Pressing it lightly with your fingers can help to its consumption on some occasions.

Naturally, you can also use a resin vaporizer or e-nail, though in these cases it’s advisable to have high-quality resins with hardly any impurities. And the same applies if you want to turn your kief in a liquid with the help of Wax Liquidizer and create your own psychoactive e-liquids.

Kief is one of the oldest concentrates (and probably the second oldest type of cannabis extraction after “charas”), with centuries of history in parts of Central Asia and the Middle East. And it still is the favourite of many!

The post What is Kief or Skuff? appeared first on Alchimia blog.